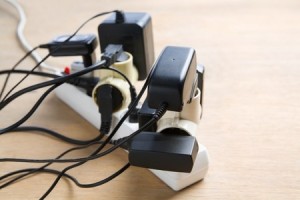 Spend much time as a home inspector, and you’re bound to see some pretty frightening examples of DIY electrical work. From frayed extension cords to ancient knob and tube wiring, we’ve seen our fair share of electrical hazards over the years. Fortunately, most of these hazards can be quickly remedied in order to keep you and your family safe. Today, we’ll look at a few of the most common electrical hazards we encounter in our line of work.

This problem tends to happen in older homes whose electrical systems are still protected by a fuse box rather than a circuit breaker. Most circuits in your home should be protected by 15 amp fuses. Sometimes, when fuses blow, homeowners will replace them with larger 30 amp fuses. These large fuses constitute a fire hazard because they won’t blow before electrical loads reach dangerous levels. If you see any green 30 amp fuses in your fuse box, replace them with 15 amp fuses as soon as possible.

This is one of the most prevalent electrical hazards we see. It happens when homeowners plug multiple extension cords and/or power strips together in tandem in order to increase their length or number of outlets. According to the Electrical Safety Foundation International (ESFI), the improper use of extension cords is responsible for roughly 3,300 house fires every year. Extension cords should only be used as temporary solutions, and they should never be plugged together with other extension cords or power strips.

This problem is especially common in appliances such as old light fixtures. If you suspect the wiring in an appliance is faulty, have it inspected by a qualified electrician and rewired if necessary. If you’re ever shocked by an appliance, unplug it and don’t use it again until you can have it repaired.

In home offices, we’ll sometimes see electrical cords covered by carpets to keep them out of sight. This does help to organize your wires, but it can also cause them to heat up faster and potentially cause fires. Wires hidden under carpets also tend to get walked on and run over by rolling chairs more often, causing them to wear faster. Keep your wires organized with zip ties instead, and keep them out from under carpets.